A side view of the veg garden, where I pulled up some plants and planted new ones (mostly peppers).

After two weeks when we were away in New England, the vegetable garden has grown a LOT! I’ve pulled out or cut back what remained of the peas and mustard greens, and will plant peppers. Bush beans, runner beans, and pole beans are all flourishing, as are the basil plants. Squash borers got one of my zucchini plants, so that has to be destroyed and replaced. Melon plants are already climbing up the arch. Tomato plants are setting fruit but it’s a race between us and the chipmunks! I let some volunteer seedlings grow outside the raised beds in hopes that they will draw the chipmunks. My daughter calls it ” the chipmunk tithe.” 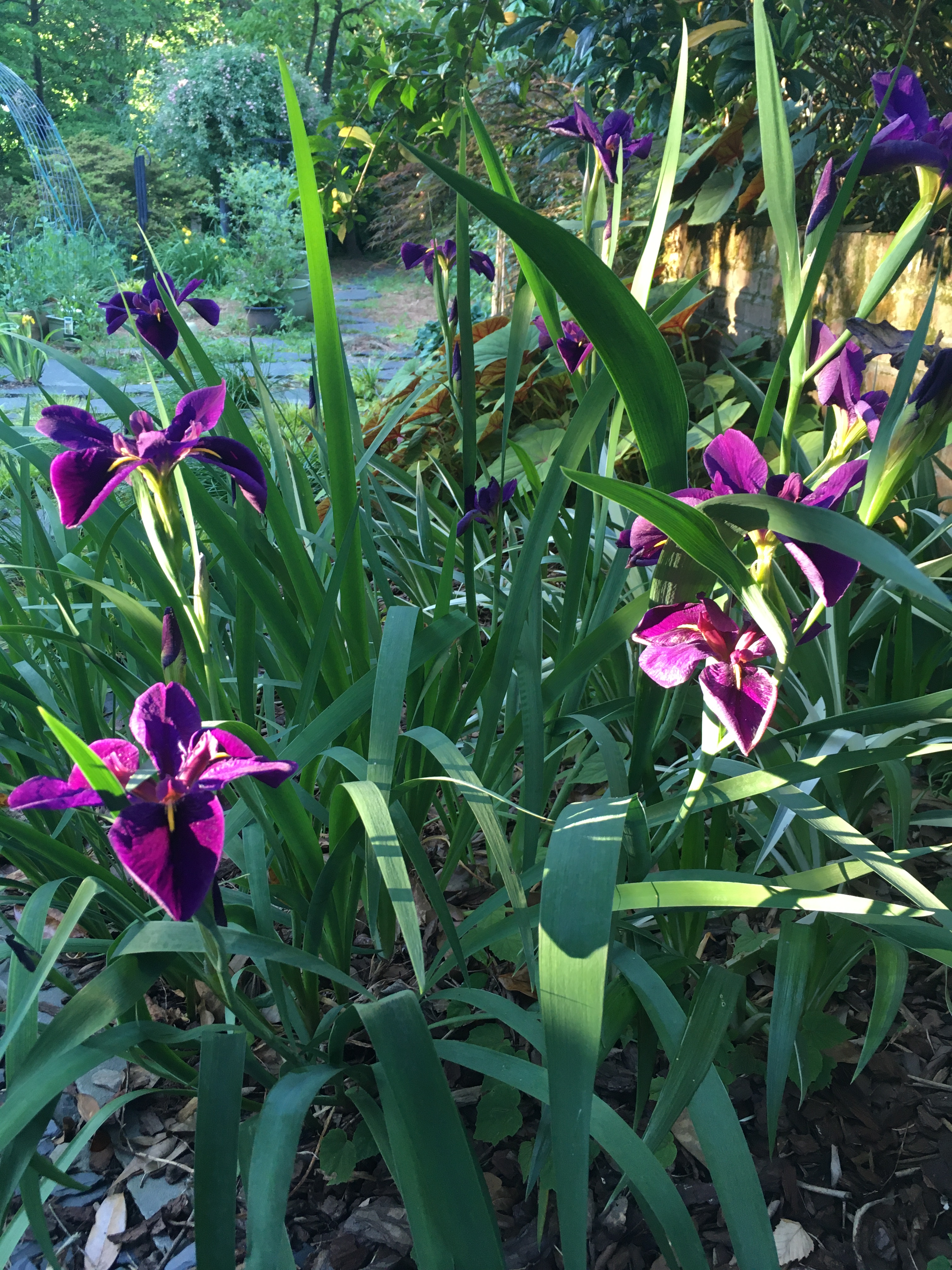 My Saturday Snapshots mostly focus on the vegetable garden, which you can barely see in this photo in the back left corner, but I couldn’t resist sharing this photo of my Louisiana iris in full bloom, with the late afternoon sun lighting them up at a slant. 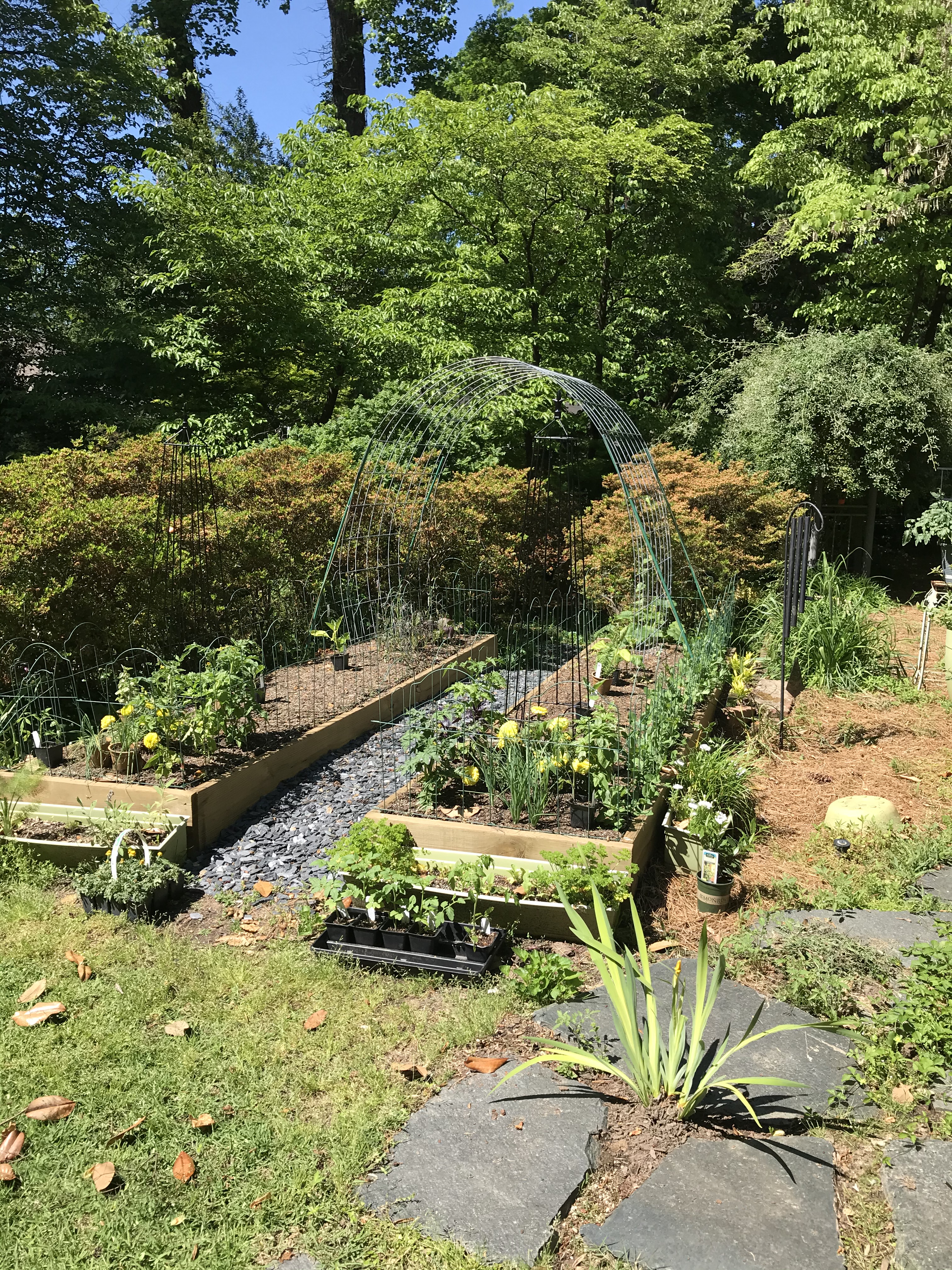 The planting and weeding continue! Azaleas have mostly faded away and are being pruned. I bought some interesting tomato seedling from a local community garden’s plant sale, which I look forward to trying! 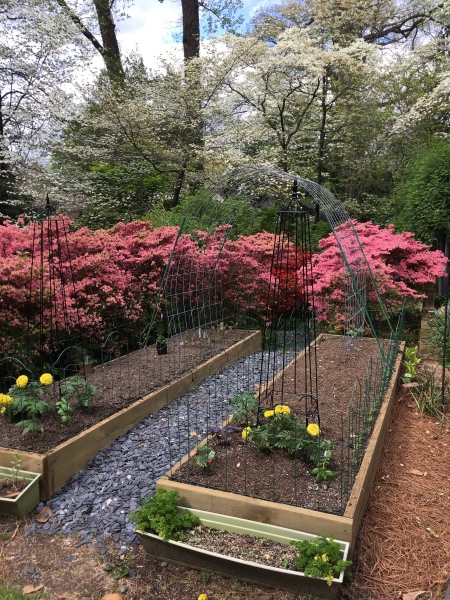 The latest on my vegetable garden, April 2021. Peas are growing, obelisks are in place for planting runner beans, mustard greens are planted.

This was scheduled to post last weekend but it didn’t! So this photo is for April 17-18.

I have a new vegetable garden! Last spring, at the outset of pandemic lockdown, I planted two temporary raised beds of vegetables, partly to make sure my family had fresh produce in case of store shortages, and partly as a mindful, calm activity to soothe myself and get outside. It was very successful but it quickly overran the limited space I had and became more of a vegetable jungle than garden! It was also awkwardly positioned near the site of a huge tree stump that we hadn’t yet removed, which limited my ability to reach into the beds.

So this spring, we hired a local group that specializes in “edible landcapes”, who removed the temporary beds and the massive stump, and built two long, narrow raised beds with a path between them, and a trellis arch made from cattle fencing to support squash, melons, and maybe some runner beans. Here it is, with only a few plants in place yet:

My goal is to post a snapshot weekly of the vegetable garden’s progress. Wish me luck! And please share in the comments any advice you may have, or any updates you’d like to share about your own gardening adventures!

Some close friends of ours have sold their house. Well, yes, of course, they are entitled to, it’s theirs. But we are finding it very sad. How many gardeners are brave enough to create something as joyful as this? (It’s Crocosmia Lucifer) We’ve spent many happy hours in that house with them, so that it…

This is a lovely tribute to a friend’s garden. Can you think of a garden you’ve “lost”? We lost our next door neighbor’s garden years ago, when a new owner literally bulldozed the whole thing, leveled its lovely slope toward our back yard, and put up an unsightly brick wall (yes, we covered our side of that wall with vines years ago. Clematis armandii covers many sins). The reason we felt attached to the other garden, though, was that our own house was lived in for many years by a couple who were passionate gardeners. I’ve been told that the husband was also a landscape architect or designer. We bought our house in part because of the long-established plantings and terracing. The longer I live in our house, the more I appreciate its clever design — the way one side is screened by magnolia grandiflora so that we don’t see any of the nearby office buildings, for example, and the way different elements of the garden reveal themselves over the seasons, through thoughtful placement of evergreen and deciduous plants.

And the story of the former garden next door was shared with us by the previous owners. They had bought their big old house in the late 1970s, when parts of this neighborhood still contained large turn-of-the-century houses that had been converted to boarding-houses in the 1940s and 1950s, when many city residents started migrating to newer suburbs. As a young couple who had just put all their savings into one such house, they did most of the renovation work to convert it back into a family home themselves. By then, the former owners of our house were elderly, but they were apparently delighted to see the boarding house return to a single-family home.

I’m told that in its boarding house years, the back yard next door was a parking lot full of old cars belonging to residents, and it wasn’t unusual for some of the heavy drinkers among the residents to sit out there, on the roofs of the cars, drinking cheap liquor. Which would explain the 6-7 foot high chain link fence that entirely surrounds our small lot! So the young couple weren’t entirely surprised when the elderly neighbors appeared on their step to welcome them, and offered to redesign their back yard. Our house is two stories tall, with an unimpeded view then into the neighbor’s yard from the upper story and through the chain link fence, so the offer wasn’t entirely unselfish.

Of course, the new homeowners (who were also expecting their first baby by then) had priorities in their renovation other than the back yard! But they accepted the kind offer for a garden design, and ultimately implemented it. By the time we bought our house, after the older couple had died a few years before, the neighbors’ garden was well established, and its design elements cleverly echoed some of our garden: long borders of Coral Bells azaleas, fronted by large-cup daffodils, and edged by liriope. What works is that both the azaleas and the liriope are evergreen in this climate, and you trim back the liriope quite hard in January/February, just before the daffodils emerge. After the daffodils have put on a show with the pink blossoms of the azaleas, their dying foliage is hidden behind the liriope’s new growth, which will provide long masses of purple blooms later in the summer. Blossoming trees like white dogwoods punctuate those long borders, which was especially effective and simple in the lot next door, whose backyard was basically a big square, now bordered by the azaleas and companion plants. The flat center became a lawn suitable for young children and their play.

And the view from the back of our house, two stories up, was of two matching gardens, side by side: one young, one old; one mostly flat, one terraced; one with tall, old trees, one with smaller, fast-growing, newer trees. I like to think of my house’s elderly owners being able to watch what became a family of four little girls playing in the pretty garden they helped create. We knew that family well; they were wonderful neighbors. One of those little girls, by then a young teenager, came over to take care of my toddler while her mother drove me to the hospital for the birth of our second child, so my husband could meet us there straight from work.

Alas, the matching garden was demolished after about twenty years. The new owners were unpleasant people, so we didn’t particularly mind the new brick wall. Happily, they moved to grander quarters after several years, and our current next door neighbors are lovely. All’s well that ends well! Except for the loss of that garden.

Writing on the Greatest Show on Earth

A Journey Of Perfume Creation

Perfume reviews and thoughts on a perfumed life by Normand Cardella

Perfume and other beautiful things

A Journey of Impression Through Fragrance

Notes from a fragrance lover and reviewer